WATCH THIS FIRST for an overview: NYTimes Documentary (5 min.)

​Read this Article for a history of the tank: The origins of the Rebbe’s ‘tanks against assimilation’ 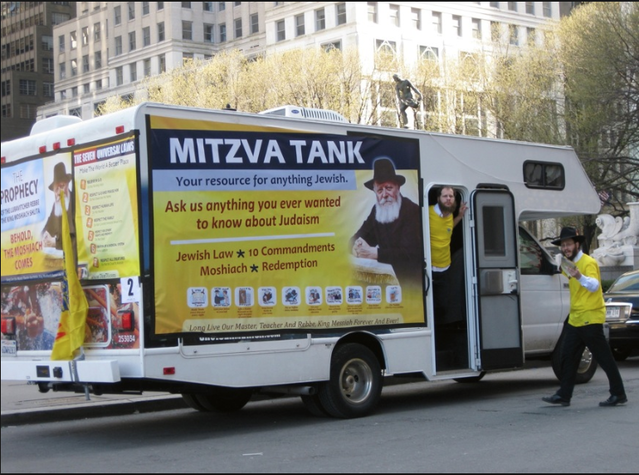 This tank is more modern than the 1991 version and bigger. (*Spell Mitzvah with an H. The spelling of Hebrew words in English is a bit flexible!)

What is a Chasidic Jew?

Video taken from this website, which explains each fact in greater detail:
​https://www.chabad.org/library/article_cdo/aid/4079238/jewish/17-Facts-Everyone-Should-Know-About-Hasidic-Jews.htm

Modified from Wikipedia: Rabbi Menachem Mendel Schneerson (April 18, 1902 – June 12, 1994), known to many as the Lubavitcher Rebbe or simply as the Rebbe, was a Russian Empire–born American Orthodox Jewish rabbi, and the last rebbe of the Lubavitcher Hasidic dynasty. (note: A "rabbi" is a teacher or mentor. A "Rebbe" is the spiritual leader of a Hasidic dynasty.)
​
As leader of the Chabad-Lubavitch movement, he took an insular Hasidic group that almost came to an end with the Holocaust and transformed it into an international network of over 3,000 educational and social centers. He oversaw the building of schools, community centers, drug-rehabilitation centers, care-homes for the disabled and synagogues and created a global network of emissaries, known as Shluchim. Today there are shluchim in all of the 50 US states, in over 100 countries, and 1,000 cities around the world.

Educated in mechanical engineering and mathematics in Paris, Schneerson escaped the Nazis in 1941, immigrating to Brooklyn with his wife Chaya Mushka. He took over the position of Chabad rebbe after the death of his father in law. During his decades of leadership, Schneerson worked over 18 hours a day, meeting with visitors seeking mentorship late into the night, and never took a day of vacation. In 1991, returning from a visit to his father in law's grave, a car accompanying Schneerson's motorcade ran a yellow light and accidentally struck two Guyanese-American children. One child was killed. The incident elevated existing racial tensions in the Jewish/Afro-Caribbean neighborhood and triggered the Crown Heights riot.

Schneerson spoke passionately about the coming of the Messiah and launched the Mitzvah Tank campaign to help elevate the world through acts of charity and kindness. During his life, many of his admirers hoped that he would be revealed as the Messiah. They pointed to traditional Jewish theology which teaches that in every generation there is one person who is worthy of being the Messiah, and if God deems the times right, he will be revealed by God as such. Although Schneerson constantly objected to any talk that he could be the Messiah, this notion sparked controversy among the other Chasidic sects, all lead by their own rebbe. Read more on the Wikipedia entry.

This is the speech Zalmy references in his Rebbe story about Lamplighters. Every Chasid knows it well.
​It is their mission: to light the souls of the Jewish people.

Many of the Rebbe's followers believed that if they made the world a holy place through enough good deeds known as mitzvahs, the Rebbe would be revealed as the Moshiach and the Messianic Era would begin. Throughout his life, the Rebbe denied that he was the Moshiach; nevertheless, this song was sung as a rallying cry. This is a video of the first time the Rebbe heard the song.

A step-by-step guide for laying tefillin and reciting the prayers the Chabad way:

​(Listen to the "Ashkenaz" recording of the prayers.) 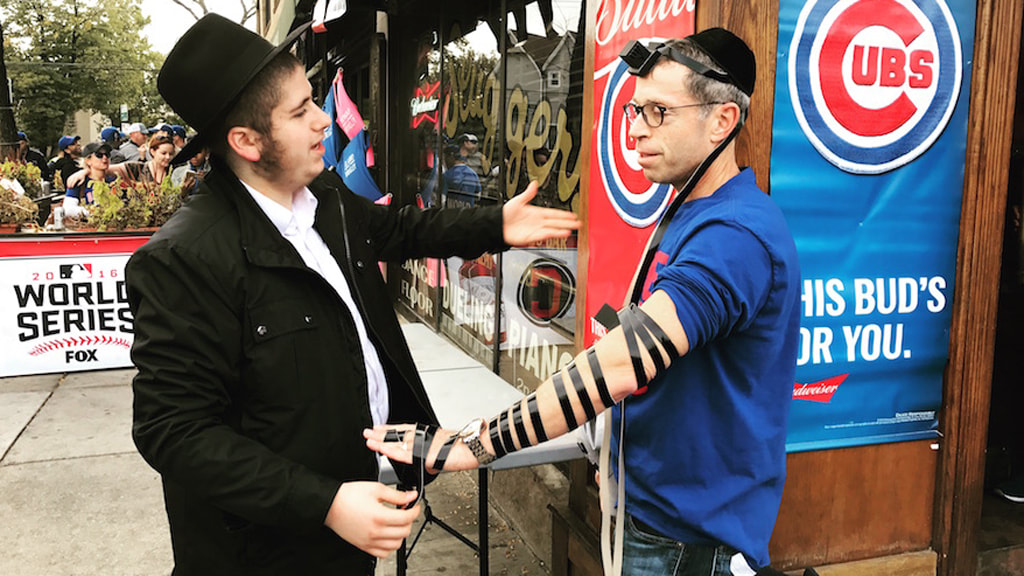 **NOTE** Head and Arm tefillin are holy objects. Do not let them touch the floor! Some observant Jews may take issue to tefillin being worn onstage, especially by actors of non-Jewish descent. In this event, your local synagogue may have or be able to help you locate tefillin without holy scrolls inside.
Consult with your local Jewish community in advance to avoid potential conflict with this prop! 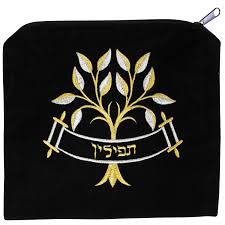 When not in use, tefillin are wrapped neatly and stored in a velvet pouch.

The Uniform: Chabadniks in the 90s 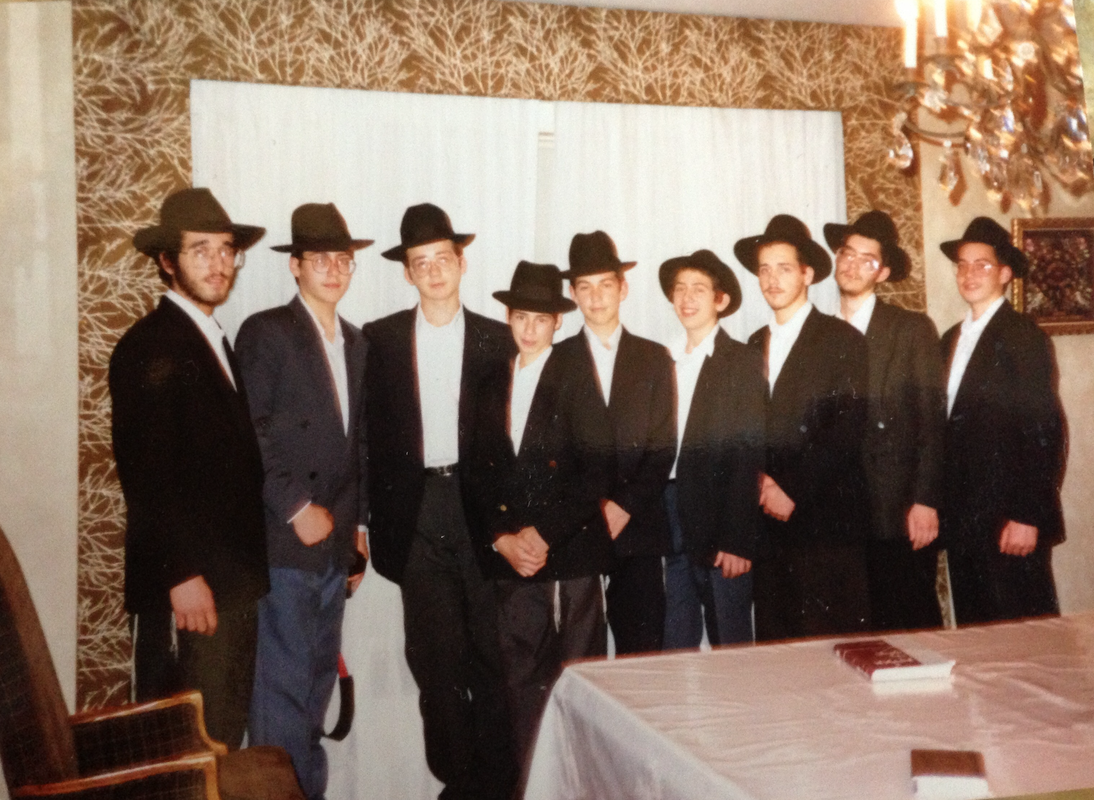 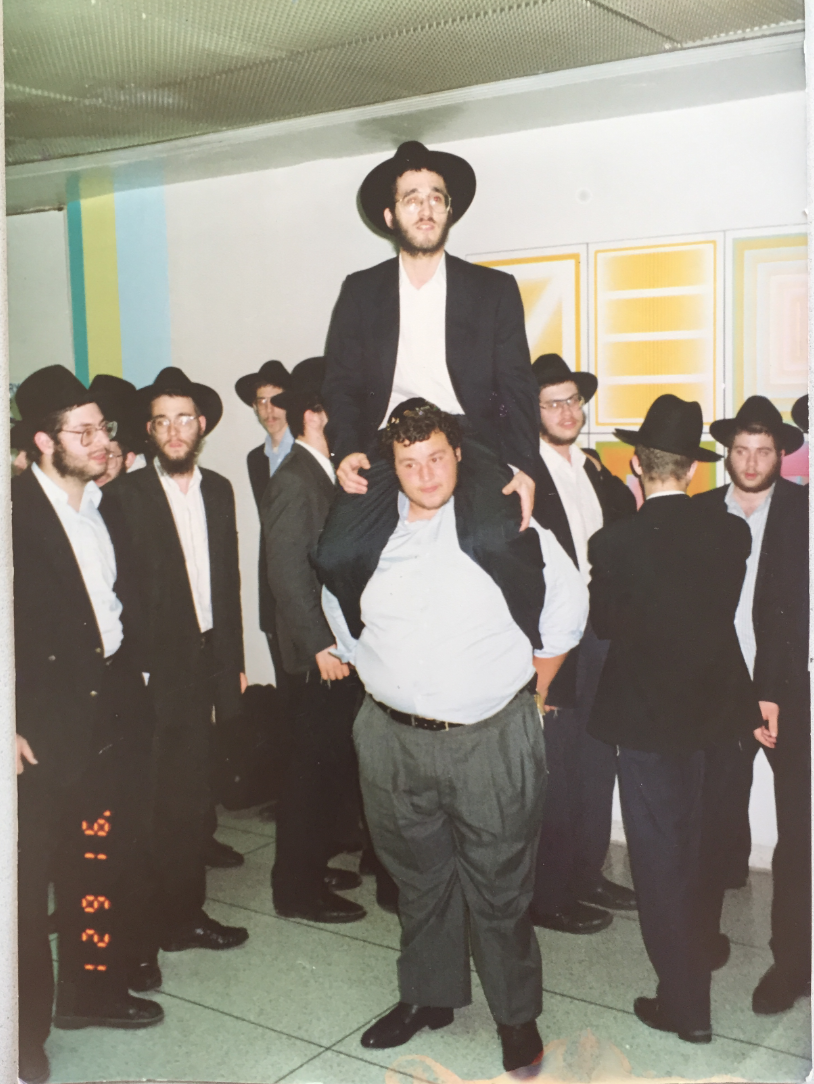 Use this recording with the Glossary at the back of the script.
https://theaterjdramaturgy.tumblr.com/post/173581452108/josephs-pronunciation-guide-from-may-3rd

Avraham Fried is considered a Chasidic rockstar. Zalmy and Shmuely love his music.
Chasids love to sing!
As a community, they strive to find a connection to God not only through prayer but also through music, dance, and celebration.

Chasidic Jews watch Fiddler on the Roof for the first time

Note: not all these Jews are from Brooklyn! Don't try to copy the accent. But this is hilarious.

Manhattan and Brooklyn in the 1990s

Examples of 3-fold pamphlets Zalmy and Shmuely would hand out on the street or have in the Tank.